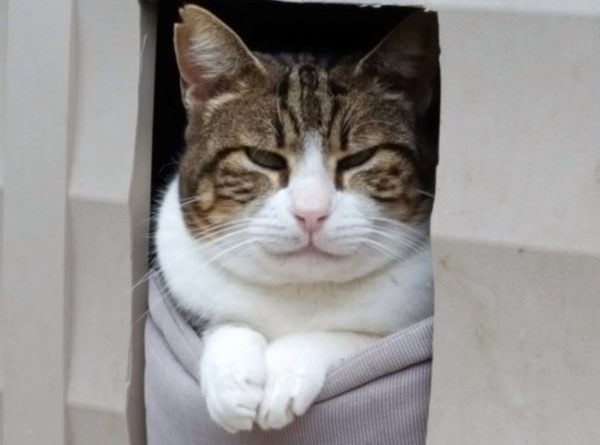 Welcome back dear readers.  I gather my fame is spreading – Sam says I’ll soon be signing auto-pawgraphs.  But then she laughed so I think she’s joking – she is so rude to me at times, I must speak to Bomber Command about sacking her.

Efforts have been made to make me go back into the other garden.  Naturally Marmite and I have both managed to evade capture so far.  I’m waiting for somebody to dare get the net out – so far, the only good thing done with that net is poking one of the vets in the face!  Sam says it was an accident but, personally, am not convinced.  Anyway, for an old boy I can be spritely when I need to be.  I can see the staff plotting and trying to decide which way I will turn … ha, they will never outwit a cat of my calibre … and I can see Layla easier from this garden.  She is just lovely although Sam says she doesn’t like other cats much.  Well, she hasn’t met ME yet, that will change her mind.
Here is my interview with Tilly …
C – Morning young Tilly
T – Morning, Mr Conan, Sir
C – That’s what I like – respect to one’s elders – Sam take note!  So Tilly, tell us about yourself
T – I’m just over a year old.  I was very scared when I first arrived but I went into foster care with two of the staff and now I like everybody, especially those who want to play with me.
C – Well, I suppose you could be right, although don’t forget cats are far superior.  So, I wonder why you’re not adopted yet?
T – They tell me it’s because I’m black ….
C – What’s wrong with that?
T – Spanish people think we are unlucky – but I don’t feel unlucky, I just feel like me and that can’t be wrong?

C – Definitely not – I think you’re lovely – in a kindly, paternal way of course.  You know that, in the UK, black cats are considered very lucky and can do spells – Sam said so – and I have checked online, she’s right.  I suppose, as long as you’re here, you can help me enchant the staff to get more food and nip?

T – Whatever I can do to help you Sir – do you want to play with the feather stick?
C – Tilly, you will learn soon enough, that us Patriarchs don’t bother ourselves with trivial things like toys – although, if you find any catnip lying around, you know where to bring them – I’ll be in my office, er I mean the tent.  I have seen the future Tilly and it’s Conan-shaped !!

Until next time lovely people, love and paws Conan x 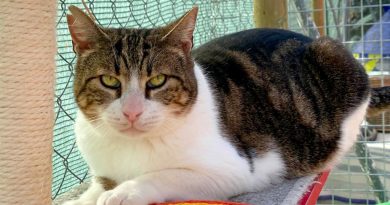 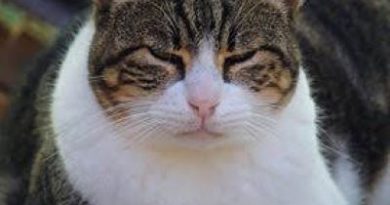 Shelter Update and Interview with Sam